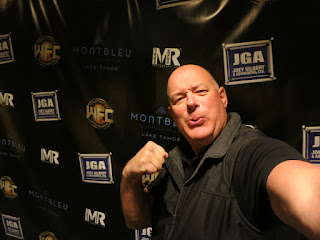 Last Saturday night (01-12-13) our crew made the trip over the hill to South Lake Tahoe for the World Fighting Championships (http://worldfightingchampionships.com/) MMA fight night at Montbleu (http://montbleuresort.com/) A beautiful casino right there on the border of Nev & Cal in South Lake Tahoe. I get the opportunity to do camera work in some of the most beautiful places in the world and this is one of them. Check it out.﻿

Here I am with the promoter and the belt for the Championship bout that night between Justin McClain and Corey "The White Mamba" Carlson. The White Mamba prevailed with a choke hold in the first round. But the fights leading up to that were very entertaining. 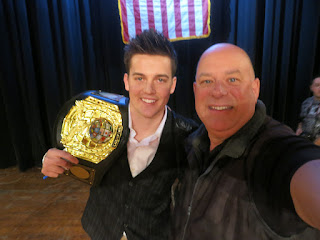 Here I am ringside setting up our video production land, running cables, and hanging with the ring installers. 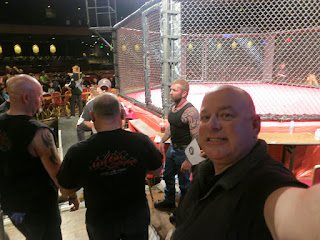 Here's our video production area where Chris calls the show and Mark does replay/graphics. Once again Envision (http://envisionvideoreno.com/) did a stellar job with the video production gear and getting us up there on a cold winters day. 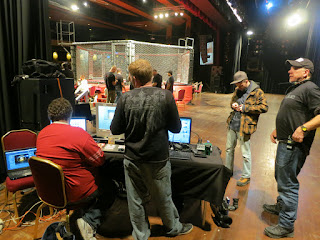 This is one of our camera ops, Jason in position for the fights. My position is just opposite of him. You can't see me in this pic but I'm the guy handing up the cable to the guy on the ladder. 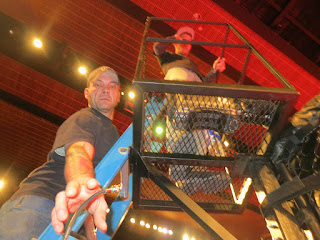 Here I am in my position. Great vantage point for a video camera op but killer on your neck because the angle is so steep. But I'm not complaining, I've got a great view and can rotate easily to catch any of the action in the whole venue. 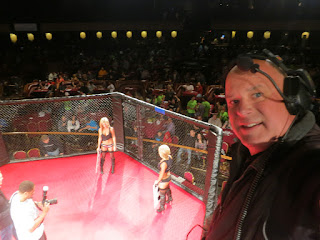 Here I am mugging with one of the fighters before his fight. He won his bout which made me feel good like I had something to do with it. 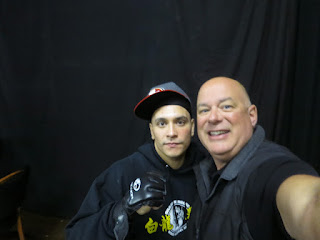 Here I am backstage where the fighters in the blue corner are getting taped up and ready for their fights. In all the fights I've worked over the years I've never been witness to this but because of the layout there at Montbleu I could watch for the first time. Of course I had to be professional and give them their space but it was fun watching for the first time nonetheless. 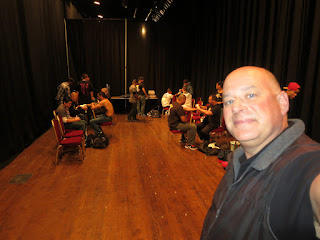 One thing I love about this business is once you've been in it as long as I have you never know who you're going to bump into. Well here I am with old friend Sylvia Lee. We worked together in Las Vegas for over 8 years and surprised the heck out of me that she's now a Fire Inspector for Douglas County! 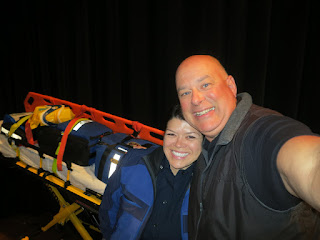 Here I am with some of my new friends! These ring girls were a couple of the best I've worked with. I love being your Reno Camera Guy! 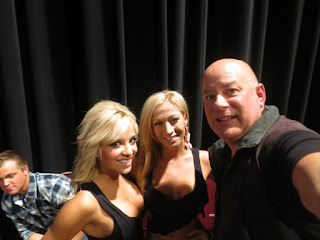 Over all is was a great night for video production, no gaffs or goofs.
We 3 camera guys got all the shots and the best part was we got to enjoy the Montbleu buffet.
The set/strike took minutes with our Tricaster and a few cables.
My camera made it through the night on one battery.
I put a tape in my camera and got all my shots so look for that video soon on my site.
I'm loving 2013 so far!
Next Fight on March 15th with a blog to follow.
Until then Keep It In Focus!
﻿ 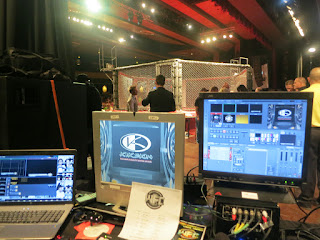 Posted by Bill Nagel at 3:12 PM No comments: 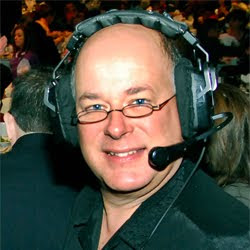